Actions That Help Us Understand Our Government

In the United States, our governments are entities created by us to protect us and our property and to provide services we believe should be provided by a central group.

The are many levels of government in the Unites States – Federal, state, and local. Local includes county, city, home owner associations and more.

As President Lincoln noted in his Gettsyberg Address, each of our governments is “of the people, by the people, and for the people”. Our goverments are made up of U.S. citizens and, for the most part, they are elected or appointed by elected officials.

The role and responsibilities of each level of governemt is laid out in their founding documents. In the case of our Federal government, the founding documents start with the U.S. Constitution and its amendments and continue with the laws passed by Congress. States have constitutions, counties have charters, cities have articles of incorporation and so on.

As citizens, it is critical that we understand what our governments are doing and how they are working so we can make sure they don’t take on more power and responsibilities than we gave them and that they carryng out the powers we did give them effectively.

Capital Cities USA lists and provides interesting information about each of our 50 state capitals. 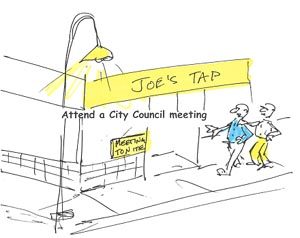 Unless one lives in an area governed by a homeowners association, the city council or county Board of Supervisors is probably the “lowest” level of government that affects each of us.

Attending one’s City Council or County Board of Supervisors meetings is one of the easiest and most relevant ways to see our democratic government in action. Easy in that the meetings are relatively close to where we live and relevant because most of the issues discussed affect us.

Such visits afford us a chance to assess the competence of individuals we have elected, to understand the governing process, to understand important local issues, and to provide our input directly to our elected officials.

While many towns broadcast their meetings on local cable TV channels, being inside the council chamber gives one a different and more realistic feeling and it takes some of the mystic out of government. Town meetings are usually held a few times a month. 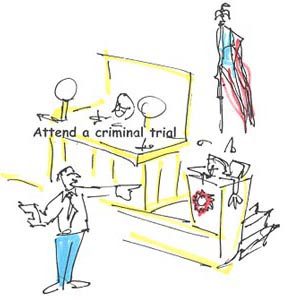 The public is allowed to sit in on almost all jury trials. There simply is nothing like attending a criminal or civil trial to give one a sense and perspective of our legal system – both the good and the not so good. The court building is usually located in the County Seat.  Unless the trial is for a juvenile, one is allowed to walk in and observe.  The court calendar is usually often posted outside the court and indicates if jury trial is scheduled.

Attending helps one understand the:

Attending a criminal trial will help demystify some of the glamour associated with some major trials.

Go on a police "Ride-Along".

Forget going to an amusement park. Forget watching reality TV. If you want some reality, go on a Police Ride Along!

Many police and sheriffs’ departments have programs where citizens can ride along with patrol officers. Call your local police department of sheriff’s office to find out if they have such a program and if so, how it works.

Many of us live in a “sheltered” world.  We live in a socio-economic world where we are generally unaware of the level of crime, violence, poverty, and despair.

Riding with a police officer gives one an appreciation of:

Read the Constitution, Bill of Rights and Declaration of Independence. 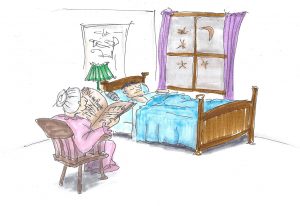 Having a clear understanding of the basic founding documents gives us the proper perspective upon which to take actions and to believe in the actions we take.

Our heritage formally began on July 4, 1776 when the 13 United States of America declared their independence from the State of Great Britain. The Declaration of Independence describes why we broke away and suggests the kind of society the founding fathers wanted to establish in America.

“When in the Course of human events it becomes necessary for one people to dissolve the political bands which have connected them with another and to assume among the powers of the earth, the separate and equal station to which the Laws of Nature and of Nature’s God entitle them, a decent respect to the opinions of mankind requires that they should declare the causes which impel them to the separation.”……

The Constitution and the related Bill of Rights and other Amendments describe the laws and principles upon which our country was founded.

“We the People of the United States, in Order to form a more perfect Union, establish justice, insure domestic Tranquility, provide for the common defence, promote the general Welfare, and secure the Blessings of Liberty to ourselves and our Posterity, do ordain and establish this Constitution for the United States of America.”….

Washington D.C. is an educational and fun place to visit! As our nation’s capitol, it’s not only the center of our government and most of its agencies, but it is the home to many organizations that get funded by the federal budget and the location of nation’s most recognizable and museums and monuments.

One is allowed to sit in on most Senate and House of Representative sessions as well as many Supreme Court proceedings.  It is a great way to see of government in action and to get a sense of the quality of our elected leaders – both the good and the bad.

Volunteer in an election campaign. 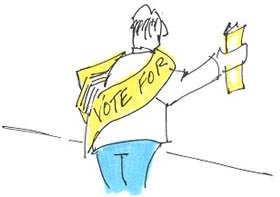 If you want to feel involved, become a volunteer in a candidate’s election campaign. It’s easy and they need you.

It will give you an “up close and personal” sense of election process and the tremendous personal sacrifice candidates make. It will help clarify some of your own positions like campaign finance reform.

Many candidates have web sites with contact information for volunteering. You can spend as much or as little time as you have.